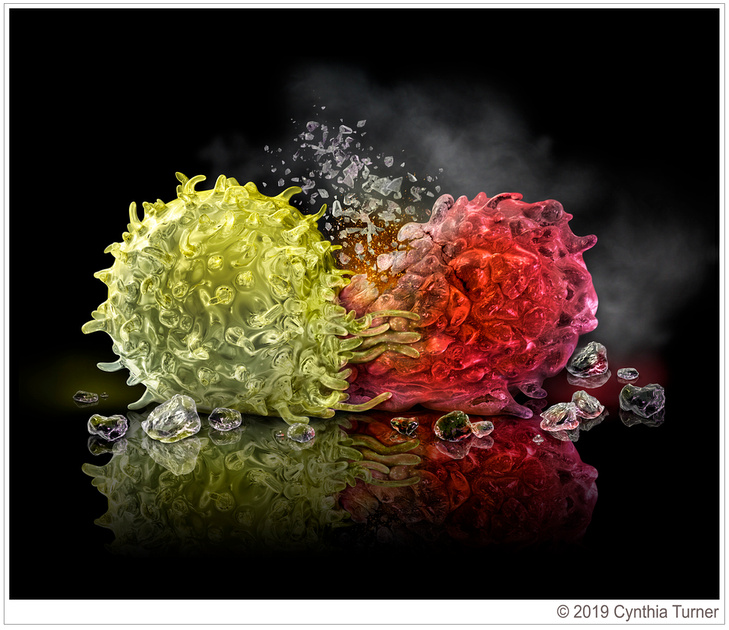 Flora: Gastric BiotaA fantasy dramatization of the flowering of gastrointestinal microbiota fertilized by the churning gastric environment. The flowering is depicted by petals of Bacteroidetes, Bifidobacteriam, and Enterococcus faecalis, pistils of Lactobacillus and stamens of Enterococcus faecalis perched on stalks of Escherichia coli. The flower itself emerges on stalks of Clostridium difficile. Free-chaining Streptococcus mutans floats by under the flower. Bacillus cereus, long rod-shaped bacteria in their arthomitus stage attach by fibers to the intestinal epithelium, grow filamentously, and sporulate from their distal ends.

Cancer Assassin is one of a series of images distributed via a self-promotional marketing program to prospective clients to promote the artist’s creativity, artistry and storytelling.

Cancer Assassin was bestowed the Print Award of Excellence by the juried 2019 RX Club Show. Founded in 1986 by Ina and Carveth Kramer, The Rx Club Show continues to honor the creative aspects of healthcare advertising and promotion. The show is judged in various categories by a panel of industry experts and is based solely on creativity. Creative concept and execution remain the only criteria for merit.

Cancer Assassin was honored with a 2019 Summit Creative Award at the Summit International Awards. Celebrating its 25th year, the Summit Creative Award has firmly established itself as the premier arbiter of creative excellence for firms small and medium sized advertising agencies worldwide and has become a coveted honor. Cancer Assassin received a Silver Award in the Illustration Category. The 2019 competition included over 4,500 entries from 27 countries for which only 11% of submissions earned recognition.